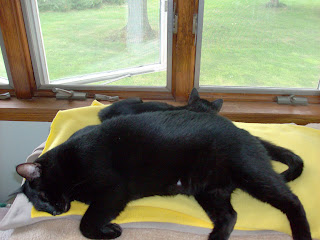 To show that Bogie didn't 'eat' Gracie, here is the picture of them sleeping about 5 minutes after the other pictures were taken.

To clarify the previous statement about the cats---I'm hoping some resolution of a new home comes eventually, also for the orphans. Especially now, since my niece is bringing the other two she had taken, BACK to our house (the apartment her friend moved into doesn't allow cats, but several people had them, so they thought it would be fine, but now it isn't....oh well.)
Posted by Camp Stanhope Happenings at 8:30 PM

Hello and I am ever so pleased to meet you all....all eight of you and your mommy bean too! I am Miss Peach and have been reading all about your adventures here.
I was so very touched and heartbroken about the story of Miss 8:30 and her kittens she left for you. She was such a good mommy and did not deserve to die as she did. Life can be so very hard at times...you know that so well with your illness. My Lapdaddy will pray for you with mommy and me that you recover fully and stay healthy.
Thank you for visiting his bloggy too. It made him happy to find a Buick for your daddy:)
Sending you much love...Miss Peach