Emmitt is slowly getting over chasing the kitties....

That's Emmitt under my sewing table (except my computer is on it much more often that the sewing machine, unfortunately), after Georgy (on the chair) swatted his nose when he got too close. 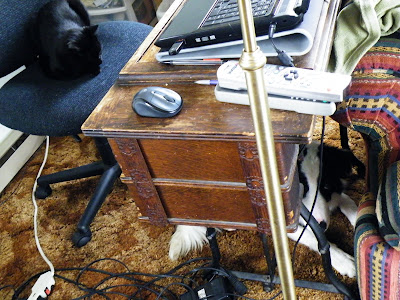 Emmitt will be going home this afternoon with his 'mommy'. I think we've had a pretty good week, and Emmitt has enjoyed being here. 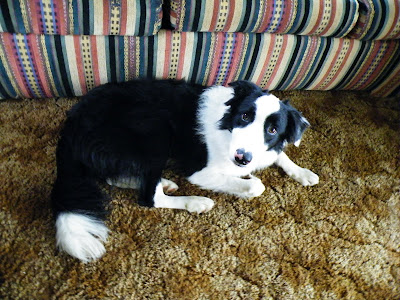 This is where Bogie has spent most of the last week--on top of the cupboard in the bathroom--so he could avoid the dog. 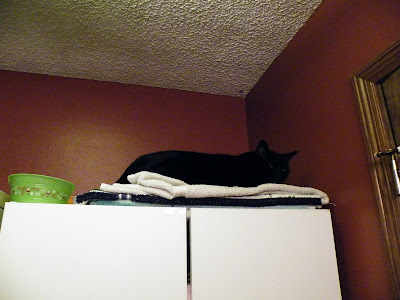 This is where Queen (the oldest) has spent most of the last week--on top of the hutch in the Prairie Room. 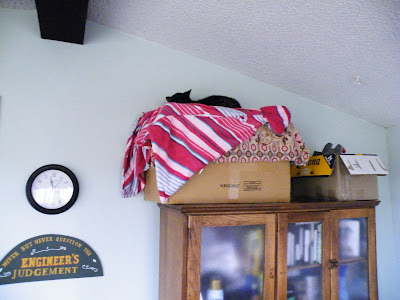 (Last Sunday morning after I was ready for church, I was trying to feed Queen a bowl of tuna, and when I reached to put the bowl up there with her, I dumped some of the tuna and juice down on me--including my hair. I didn't have time to RE-shower and get to church on time--so I didn't go! I think it should rank near the top of the 'weirdest excuses' not to attend church!)
Posted by Camp Stanhope Happenings at 1:50 PM

That's one of the BETTER ones that I have heard! HA!