On Friday John and I met Alex at the Des Moines Art Center to view some Grant Wood paintings. There was a line to see "American Gothic" in person (on loan from the Chicago Art Institute until 3/29), but we didn't wait too long.

It was a little surreal, because it's a picture that everyone has seen in some depiction or another. It's bigger than I thought it would be, and the frame looks like old barn boards. We also saw several Jackson Pollock paintings, and a collage by Jackson Pollock's wife, Lee Krasner. (My favorite besides "American Gothic" was the Monet in the back.) 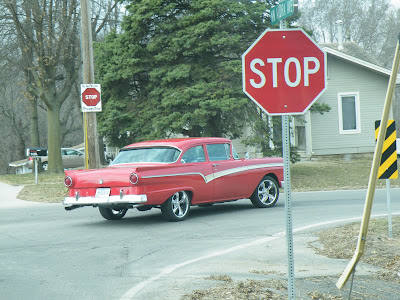 This picture doesn't really have anything to do with the Art Center. I followed this car last week when I was going to Des Moines. It's a '57 Chevy. It was really pretty!
Posted by Camp Stanhope Happenings at 11:01 AM

Lapdaddy said this is a 57 Ford Galaxy very customized.
We would like to thank you most kindly for your donation for my surgery. I hope you win the lovely pendant...
Lapdaddy says that you are his one and only blog fan...that makes us smile:)
Blessings and more to you and all your love...
Miss Peach