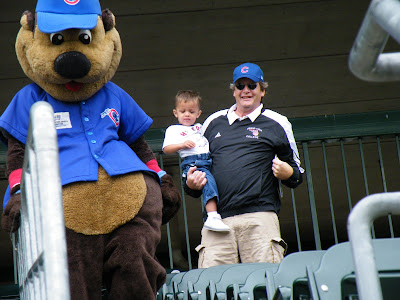 Sunday we traveled to the I-Cubs game and as we got into the stadium, "Cubbie Bear" was greeting people. He put out his hand to Izaac, who gave him the 'low five' and Cubbie Bear hugged Izaac and then picked him up (when he was sure Izaac was okay with it). Cubbie then motioned (he doesn't speak) to ask where our seats were located. I told him, and he headed for the section and carried Izaac clear to row 12 to his seat! I think John and I thought it was cool, and Izaac just appreciated the ride! 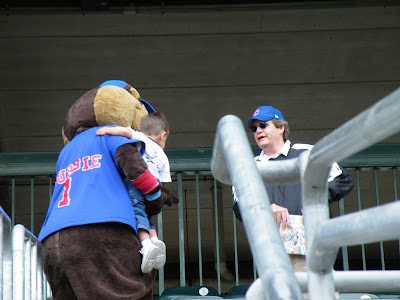 It was a chilly afternoon (forecast said sunny and 73, but the sun never full came out from behind the clouds and the wind was quite chilly with a high of 62) but the game went pretty quickly, and I-Cubs won over the Oklahoma Redhawks 2-0.
Posted by Camp Stanhope Happenings at 10:00 PM