An Eagle in the field across the road... 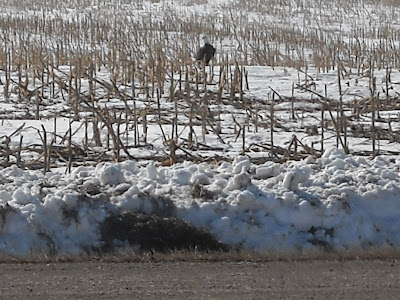 Yesterday I saw large wings going through the yard and then it landed in the field across the road from us. At first I thought it was a turkey-buzzard, because they're so big (and there's a dead opossum it probably was after), but when it landed, it had a really white head.

I tried to get closer, and took the camera, but when I slid the door open to get his picture I spooked him a little and he flew a little farther into the field. It came back two other times, but didn't get any closer. It was still fun. They soar so beautifully with that large wing-span. Here's a 12=second video of it taking off.

They are magnificent creatures!

Oh, we would love to see a real eagle! We wouldn't try to hurt it, mind you (because we're cats). We just want to see one:)