This is Samantha (my daughter) taking her own picture with Izaac on Sunday (before the hair-fixing!). He doesn't look like he's sure about her doing this. 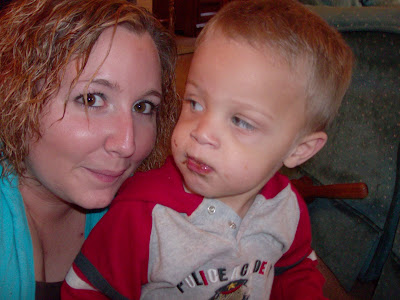 Izaac on Sunday at his Great-grandmother's house for HER birthday (and after Joe 'fixed' his hair!). Happy belated birthday MOM~! 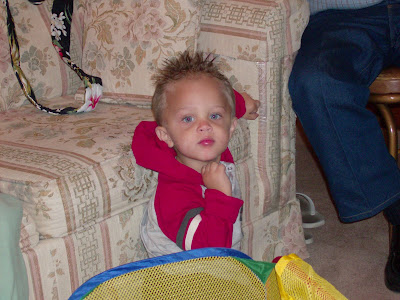 '
Since Izaac has lived with 3 women (his mom, grandmother and his Aunt Michelle) for most of his 18 months, he REALLY likes to play with his hair, and their make-up, and the combs and brushes and the lipsticks (apparently he had spread one from ear to ear and squished it down inside the tube before his grandmother realized the bathroom door had gotten left open).
Posted by Camp Stanhope Happenings at 1:54 PM No comments:

Izaac squealing at the kittens....

This is a new scratching post/toy that John built for the kittens. Izaac seems to think it's a tunnel, so he's having a little fun with it, too. 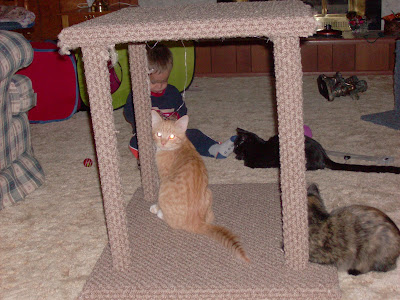 Izaac's 49-second video of squealing at the kittens! They're not always sure what to think about him.

Izaac at camp this week.

I just haven't gotten the camera out yet and used him as the target. I will do that when he wakes up from his nap. He's gotten taller since he was here a few weeks ago, and now....he climbs!

At almost 18 months he's also become quite a 'mocking' bird, repeating (or attempting) almost everything we say (especially between John and me).

He's funny with the kitties, and usually nice, but once in a while--look out cats!
Posted by Camp Stanhope Happenings at 2:11 PM No comments:

Figuring out the new computer....

This is the configuration the evening started with Saturday evening. 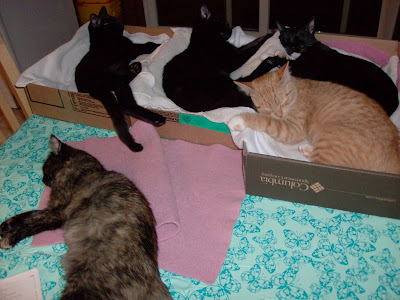 This is how the evening nap ended. 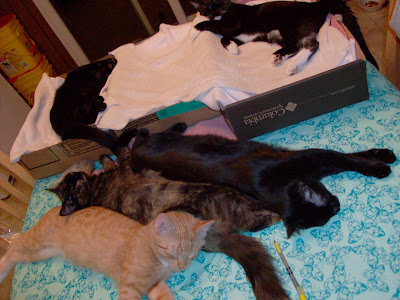 This is a house I saw in Webster City (IA) last Saturday all decked out for Halloween. 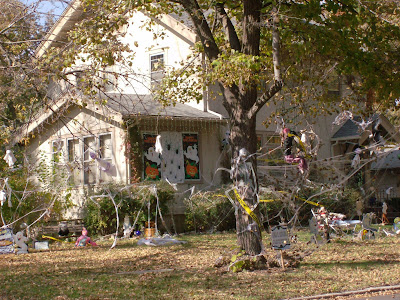 Posted by Camp Stanhope Happenings at 3:00 AM No comments:

Even though the credit card had to took a hit, I got a new laptop on Thursday. I'm still trying to figure out some things on it, but progressing with the updates, etc., at this point. I do like the space it leaves on the desk to actually do something other than 'compute'.

These are pictures of the lobby in the historic "Hotel Pattee" in Perry (IA), where we ate lunch (wonderful) last week on the way to Winterset. 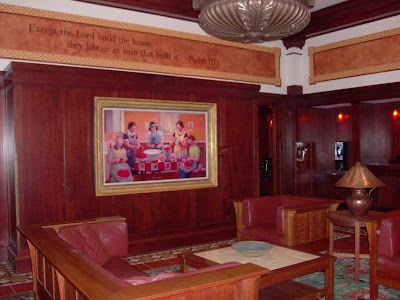 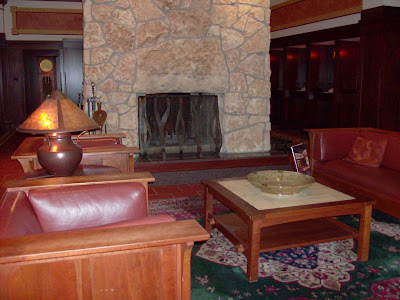 Posted by Camp Stanhope Happenings at 10:38 AM No comments:

So I have no pictures to put on the blog. Luckily I posted a bunch of new ones to the Flickr site last week. I know there are some videos lost, of the kittens and of Izaac. Dang.

I have copies of most everything else, including recipes I had on there. There were some quilt patterns, too, but I think I can re-download some of those (and probably don't need them all anyway, because I have a thousand patterns and I haven't made one 'technical' quilt yet!)

I hate computers and cars when you have to do more than turn them on and 'go'! I'm using John's laptop but can't figure out how to type well on this flat keyboard. And this keyboard travels frequently with its owner, so that means I won't be able to even check my e-mail unless I travel to the library or somewhere there's access to one.
Posted by Camp Stanhope Happenings at 7:00 PM No comments:

Yes, that's Liz Porter on the left and Marianne Fons on the right (with a tourist quilter in between) yesterday (10/10/08) in Winterset, Iowa, at their fabric/quilt store, Fons & Porter's Love of Quilting. Kim and her mom (the actual fabric enthusiast/quilter) and I travelled first to Perry. There we perused around the Antique Mall and Ben Franklin stores and had lunch at the re-opened Hotel Pattee. 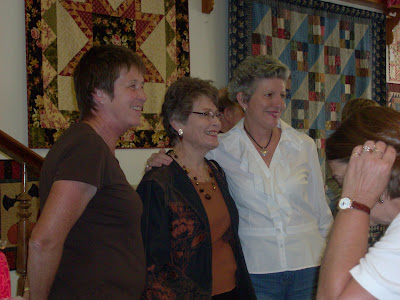 This is the Madison County Courthouse on the town square in Winterset. Winterset is the birthplace of John Wayne and inspiration for the book (and movie) "Bridges of Madison County". 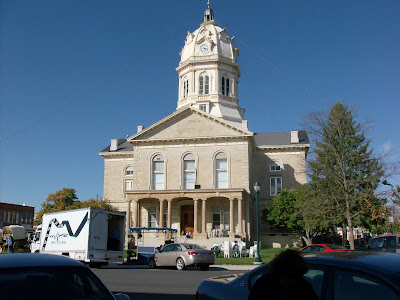 This the Fons & Porter storefront, across from the Madison County Courthouse, with a big bunch of quilters waiting for the bus to take them back to Des Moines for a BIG quilt show they had there this week. 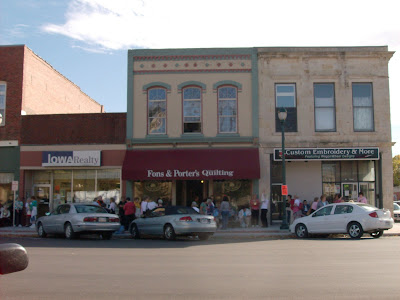 Posted by Camp Stanhope Happenings at 9:19 AM No comments:

That's Samantha rescuing Izaac Sunday from the 'big boys' while they were solving the world's problems.... 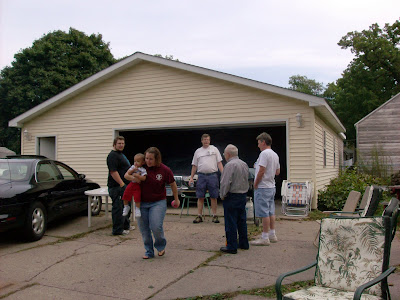 Mostly this post is an addendum to the last one because I forgot to mention I added a new batch of pictures to the Camp Stanhope Flickr Site. You can click on the line that says that to the right of this paragraph or click here.
I need to add some of the videos from Sunday, too, and from other days with the orphan kittens, etc. There's some boating ones from Wednesday afternoon (it was REALLY nice on the lake that day and relaxing!) I haven't uploaded to Flickr yet, but I'll get to them one of these days.
Posted by Camp Stanhope Happenings at 9:00 PM No comments:

It's been a fun week.

This is the line-up of cars at Grandma's on Sunday. That's Allison, Shirl and Grandma Markey debating whether to eat outside or not (we did because it was really nice). A couple of those cars parked on the street belong to our crowd, too. 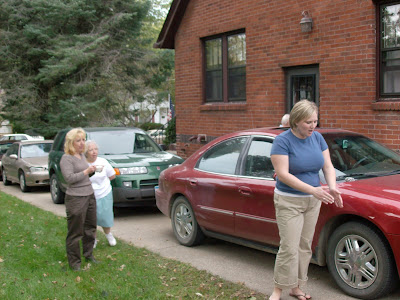 Here's the Birthday girl herself (Michelle on the right, her roommate/buddy from high school, Ngu, on the left) with her laundry! Shocking! She's REALLY growing up! 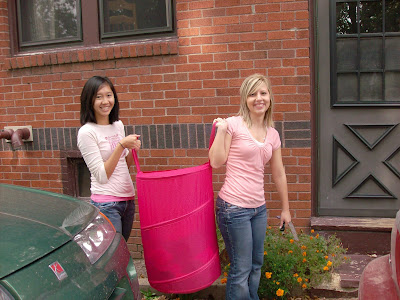 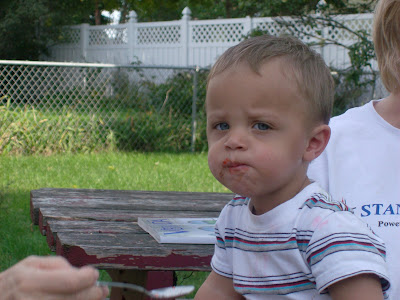 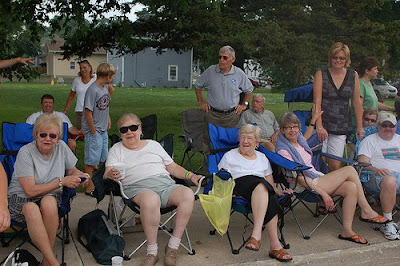 That's Michelle with Izaac during HIS birthday pictures taken (by Samantha) at Sears earlier this year. Michelle is now a coed on the campus of Simpson College, Indianola, (IA) and is making the most of campus life.
She has already joined a couple of committees, etc. and LOVES college life. GO MICHELLE!!!!! 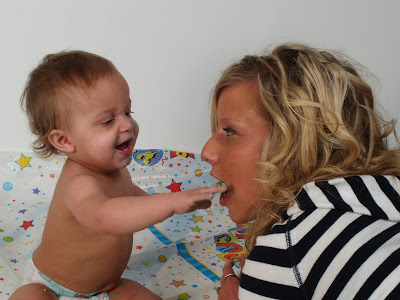 Posted by Camp Stanhope Happenings at 1:00 AM No comments:

Here's the interesting part. I stopped at Sparky's (our local gas/convenience store in Stanhope) and didn't remember about the missing wallet until I'd picked up the gallon of milk and got it on the counter. There, a fellow cheerleader buddy of my daughter's was working the cash register.

I rarely know the person behind the counter, but this night, I did. It was Nikki. I fumbled in my purse and said, "Oh, man, I forgot my wallet!". Nikki said, "that it was okay, and to take the milk home".

I could have gone the 10-mile round-trip home to get it, but I didn't have to. I offered to get money from the ATM (in Sparky's), but, of course, my ATM card was in my wallet, too. (It always is, but I was not used to being in this position, without wallet or money!)

John was planning on going to Sparky's the next morning to buy gas for the mower and the little red pickup anyway, and I told Nikki this. She said that would be fine, and in this small town, it was. Thanks, Nikki (and Sparky's).
Posted by Camp Stanhope Happenings at 3:00 AM No comments:

Here's a picture of Ron (Santo) taking a tour of a tree. 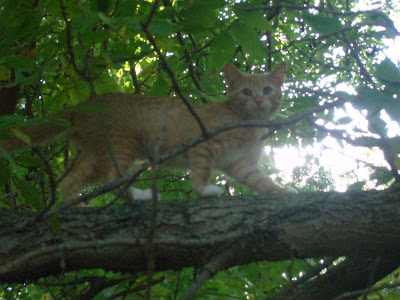 Playing in the yard is fun. Playing in the trees is fun. Chasing your siblings on a fall afternoon is FUN! This is a 12-second video of Lucy stalking her brother, Patrick. She may be the runt, but she's no wimp! She's getting fluffy, but still not as big as the other orphans.

Posted by Camp Stanhope Happenings at 3:00 AM No comments:

This is a picture of 4 of the 5 'orphans' on Sunday morning when it got so chilly (in the morning, it got nicer in the afternoon) they didn't want to stay outside for more than a couple of minutes.

At one point, they just looked at me and said, 'entertain us', so I threw some toys up the staircase and thought they would chase them or push them down so I could throw them back up to them, but they didn't figure out the game at first. 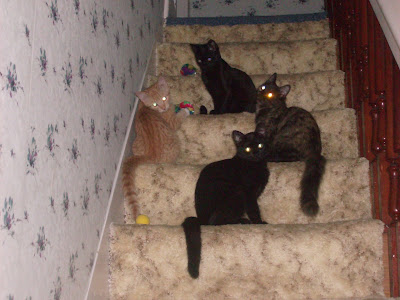 Georgey is at the top, Ron is the ginger tuxie, Lucy (runt) is to the right of Ron, and that's Gracie at the bottom of the crowd. You can tell George & Gracie apart now because Gracie is getting 'rounder' and larger than George.
Posted by Camp Stanhope Happenings at 4:55 PM 1 comment: