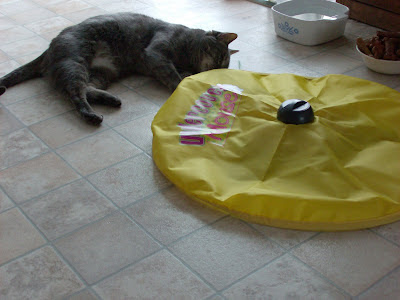 This is the new toy I ordered for the 'kids' because the weather has been so terrible they haven't gotten to go out for more than half an hour for a few weeks (and that only lasted one Monday).

All three were within 3 feet of each other without fighting. Bogie and Noel were both very interested, but didn't want the other to be, so there was a little tussle about that. Bogie was more active both days since we've had it (and worn out one set of batteries already).
Posted by Camp Stanhope Happenings at 5:57 PM 1 comment: 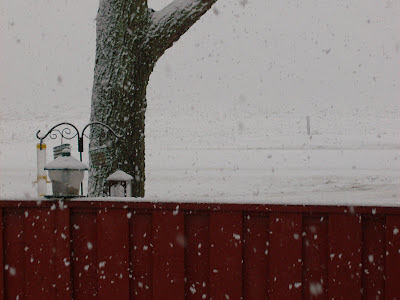 Here's what the weather looked like out the kitchen/patio door at 3pm today. This morning we had medium-heavy rain, which turned to snow about 11am. It's now 28 degrees now and the dog just slipped off the second step out the patio door.

My knight in shining armor was here scooping late this afternoon, but assured us he'd be back in the morning to clean up whatever was left.
Posted by Camp Stanhope Happenings at 9:38 PM 3 comments: 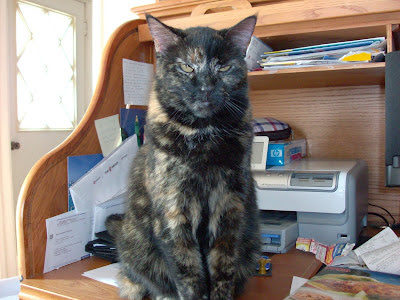 This is Queenie, who is now almost 9 years old. Apparently, she was either trying to get some lap time (she saw her younger, larger brother do that) or point out which parts of the desk are messiest!

She's in charge and doesn't let Bogie bully her. When he tries to play or bite her, she smacks him, and waltzes away (rarely does she run from him). Queenie also loves to bully Noel, though. We've only had Bogie two years, and I never had three cats before that, so I'm not sure if there's always a pecking order or not.
Posted by Camp Stanhope Happenings at 2:21 PM 1 comment:

The small human went home, now it's my turn for attention! 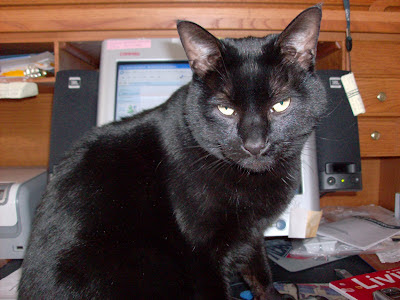 (Bogart Wrigley blogging today.)
This is my way of getting attention. I just sit here until mom gives up and tries to play with me (sometimes I will, and sometimes I won't). I LOVE to chase Noel (the weakest link) down the hallway, then back through the living room and around the desk up the stairs.

Noel is much faster than me, so she always gets away. That's part of the fun. The other day SHE chased me up the stairs and then came down without me and I looked for her for half an hour before I settled back into my fleece-covered rocking chair for another nap.

I HATE WINTER!! Apparently this winter is headed for the record books for amounts of snowfall (total inches-at least not at one time, but EVERY WEEK!) and cold. This morning when dad was driving he said the car thermometer read -19, and we have a "wind chill warning" because even though it's not that windy (and it can be WAY more windy most days out here in the weeds than any town!) the temps drop to 30-50 BELOW ZERO!!!! YIKES.
Posted by Camp Stanhope Happenings at 11:21 AM 1 comment:

This is the picture on kdsm for the samantha video

Posted by Camp Stanhope Happenings at 11:56 AM No comments:

Then they interviewed Samantha because she has student loans owned and serviced by Iowa Student Loan. (She won't have to pay on her subsidized loans until after she graduates, but WE are paying the Partnership loans to send she and her brother to college there).

When you get to www.kdsm.com click on the title of the video (not the picture, like I did) "College students worry about student loans", and you'll see her! I videotaped it, too, just in case it didn't show up on the Fox news page. She's famous!!
Posted by Camp Stanhope Happenings at 11:40 AM 3 comments:

All this water makes a guy thirsty!! 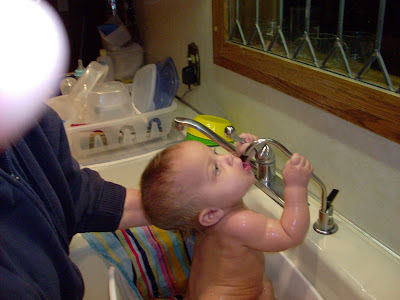 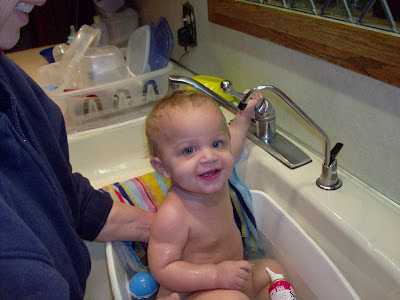 Uncle Johnny took a picture of me while I was bathing the other night. Drips of water came out of this thing once, so it became my goal to figure out how it worked. I tried sucking on it, and I did get a drip or two, but when Uncle Johnny reached over, I got a whole mouthful! I didn't even mind it was a little cold and went down my belly.

Everything is so fascinating at my age! I now follow the furry kids around (well, if they are laying within scooting distance, I go after them). I LOVE to open and close cupboard doors and drawers, and dig for stuff in them.

I LOVE the books Aunt Ann bought me for Christmas. Brown Bear, Brown Bear, and The Hungry Catepillar are my favorites. Aunt Wo-Wo reads them to me until I'm tired of them. (I'm back in Des Moines today, for the blizzard weather!) Later now...
Posted by Camp Stanhope Happenings at 1:27 PM 1 comment:

Izaac in the morning! 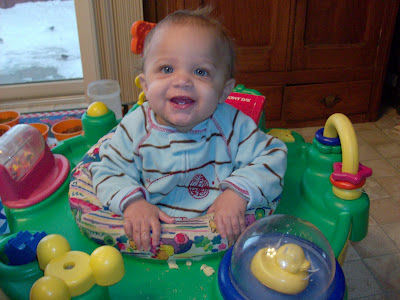 Even though his tummy might not be perfect (we're just getting over a bug?), he's still bright and sunny in the mornings! His mother wasn't doing well with her tummy yesterday, so hope she's better now, too.

We're hangin' out and watching the dog and cats VERY carefully. Izaac would like to type, but he's otherwise occupied (he's playing with the door to the computer tower at the moment. Opening and closing things/drawers is VERY interesting!
Posted by Camp Stanhope Happenings at 9:07 AM 2 comments: 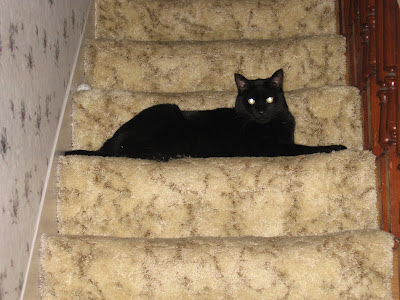 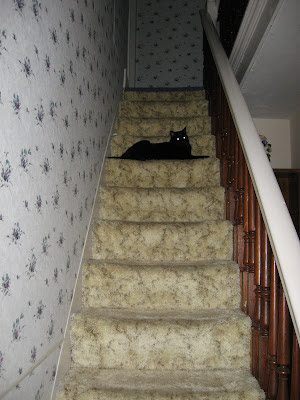 This is what all three cats like to do when they are bored inside (because of all the snow and cold outside). They have me throw toys up on the steps, and then they chase them down the steps. Well, that's if they're in the mood, and the toy actually stays in motion and comes back down the steps. Otherwise, they just plop down on one of the steps and look at me, like I should invent another game for them.

I haven't got the heart to warn them about what the weatherman is predicting. He said, "more snow Thursday, then a short break (we're in the 3-5 inch-range for Thursday, after receiving 3-4 inches of white sparkly stuff Monday) and then MORE snow on SUNDAY!!! Gheez. I'm tired of the snow and cold outside, too. oh well.
Posted by Camp Stanhope Happenings at 9:16 PM No comments: 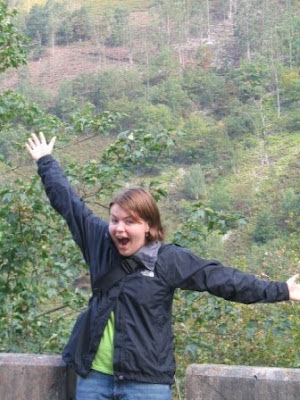 This is a picture of our niece, Rachel Newby, when she was on her adventure in Spain (in fall, 2005, I think, but that sounds like a long time ago). She is now a Peace Corps Volunteer stationed in Paraguay and having many adventures!

I was looking for the picture of Rachel in her fancy dress at her mother's wedding in 2006, but, of course, when I want to find a picture of someone, I can't! I just cleaned off a whole bunch of stuff off of this computer because I'm getting more memory installed this week. oh well.

Happy Birthday Kid! We're thinking about you!!!! Samantha even downloaded SKYPE and had her camera/microphone ready in case you were on-line today. She was here, just passing through, and now on her way back to Ankeny for classes tomorrow.
Posted by Camp Stanhope Happenings at 9:33 PM No comments: 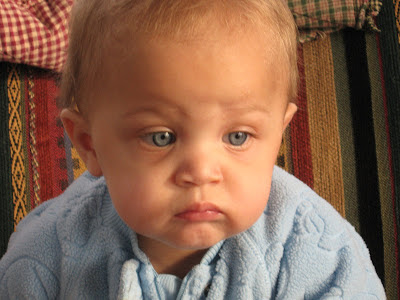 I took this of Izaac one morning when he was trying to crawl. He's really a cheery baby (at 9 months already!) so this was a rare moment.

I took close-ups of my kids when they were young with my SLR camera, but now Samantha is borrowing it for photography class at college (an elective). I should try it with that camera, but it's SO old-fashioned I'm not sure if I stand the wait (for processing/printing) to see if it turns out (vs. looking instantly at the digital picture on the camera now).
Posted by Camp Stanhope Happenings at 11:21 AM 1 comment: 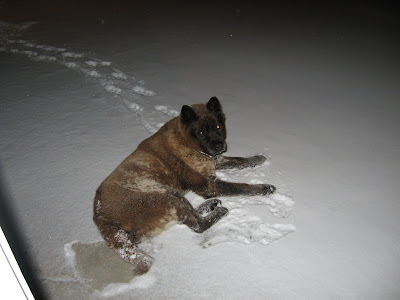 This is Chia, who dusted some snow with her tail laying by the garage door while she was watching me take these pictures (and the star wars ones from the previous blog).

She's been in most of the day napping, but enjoys new snow and decided it was time to guard the yard. (In the upper left hand corner of this picture you can get a better idea of how much snow we've gotten today.)
Posted by Camp Stanhope Happenings at 8:12 PM 1 comment:

Snowy Night! but 'silent', too. 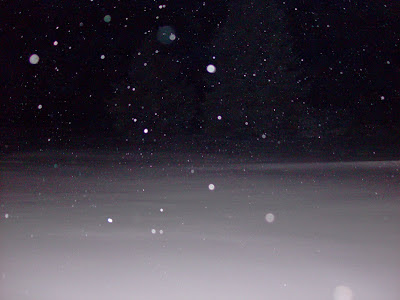 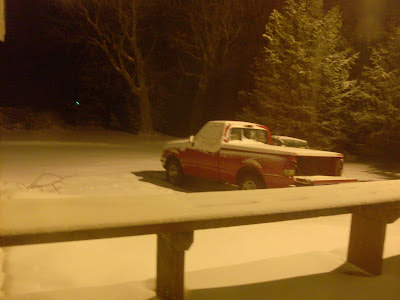 I just took this ten minutes ago out the west window under the yard light. It's still snowing pretty steadily, and we have about 2 inches on the ground now.
In the picture on the right I used a flash on the camera and it looks like something out of "Star Wars".
(clicking on either picture will make it MORE like Star Wars by making it big, then hit the left arrow key "back" to the blog)
Posted by Camp Stanhope Happenings at 7:55 PM No comments: 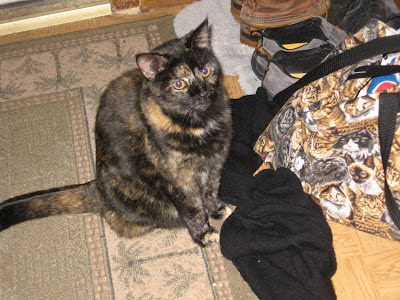 It's SNOWING AGAIN!! The cats are worse about cabin fever than I am. This is the old lady of our trio of furry kids, Queenie. She has the arrogance of a queen, too.

Here she's inspecting our boots/scarfs, etc. and wondering why she doesn't get an outfit similar, so she can venture outside more comfortably also. Snow is supposed to pile up to the south of us (again), but who knows!
Posted by Camp Stanhope Happenings at 1:06 PM 2 comments: 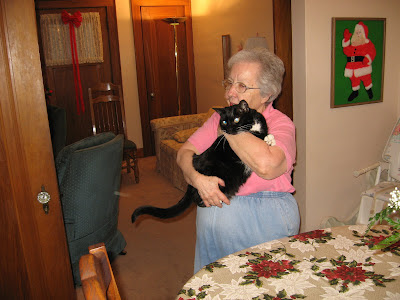 This is my mom holding Sydney on Christmas Day. You can see a little of her tuxedo outfit here. Sydney is not very cooperative about getting her picture taken. She must have learned that from her 'cousins' (at my house).

We have a dense fog advisory here today. Overnight it rained and then froze to EVERYTHING, so school was pretty much cancelled north of Des Moines for that reason, and southeast of Des Moines for the foot of snow they received yesterday! yikes!
I think I hate winter--I must be getting old!!
Posted by Camp Stanhope Happenings at 3:28 PM No comments: 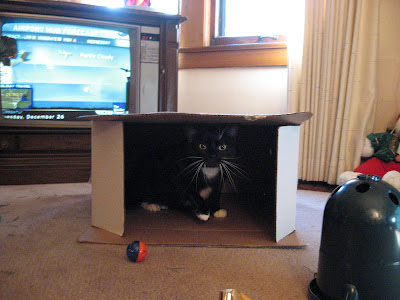 This is my dad's cat, Sydney. She's VERY independent and only likes dad to hold her or take her outside (in this weather, he takes her on occasion, but she doesn't stay long). He built a "deck" out one window so she could enjoy the outdoor air more.

John and I went to Sac City yesterday to retrieve my sewing machine. YEAH! I'll finish cleaning and making a batch of soup soon so I can try it out!

Yikes! I just pulled Bogie inside the kitchen door because there's an opossum under the steps where he was standing. Last night before we went to bed we had a black cat visit. He has different colored eyes than Bogie, and it's a little smaller, but it was like they were looking at each other in a mirror instead of through the patio door.
Posted by Camp Stanhope Happenings at 1:52 PM 1 comment: