We had a quiet, nice Thanksgiving Day in Des Moines, without John (who went to work at 9am) and Samantha (who is in Texas with Marty's family visiting his sister, who will be deployed to Iraq in late December).
I didn't take any pictures, so I'll put one of Izaac and his grandmother from Joe's birthday party on, too, since I haven't had one of him in a couple blogs.

Yesterday was calm and sunny (cold, though) and today it's gloomy and snowing. So I'll put a 19-second video of Georgy playing with his tail from yesterday because it's much funner. (I hear Reba and Kenney in the background on the radio...)

Posted by Camp Stanhope Happenings at 4:07 PM No comments:

I hope it isn't loaded!

Last Saturday evening at a banquet, Samantha's 'significant other' won a new gun. Right before they announced the winner of the door prize, Samantha said to him, 'so if you win it, it's mine, right, because I don't have one?' Apparently, he said yes, not figuring on winning it. He did win, and now this is her tough-guy pose with it! 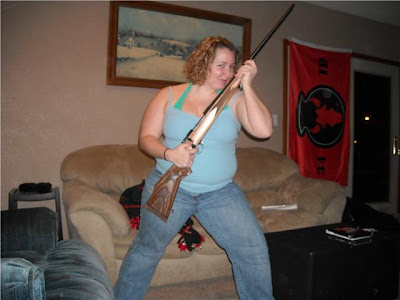 Alex's '96 Taurus wagon was only supposed to last four years after he graduated from high school. Since he's in his fifth year at college, (but will end up with two degrees next spring!!) his car seems to know the timeline.

So I took the little red truck (pictured above in the snow last Saturday) to switch with him in Ames this afternoon. While I was driving the truck, it seemed to get gradually but eerily louder as I got closer to town.

I thought at first I must have been in the wrong gear. No, I was in the right gear. Maybe it's the radio interfering with something. No, it wasn't the radio either. I got to the parking lot and told Alex to look underneath to see if he could identify something wrong.

Yes, he could.... The muffler had fallen away from the exhaust system. Alex said he'd get it fixed tomorrow morning, so I hope he made an appointment. He seemed to like the noise initially, and revved it up for me a couple of times before he left, smiling as he went! BOYS!!
Posted by Camp Stanhope Happenings at 5:51 PM 2 comments:

Today was our first 'measurable' snow day this fall, although I thought I heard the weather man saying there wouldn't be any on the ground when it was done!!!

I had to make the trip to Webster City Vet Clinic to retrieve Gracie and Lucy (who had their 'gardenectomy' and final kitten shots yesterday). I went at 10:00, as soon as I got ready after I saw the snow piling up. Highway 17 was slick, and the snow made for white-out conditions so I couldn't see the sides of the road... yikes. I feel lucky only ending up sideways once; fortunately when no one was coming the other way. 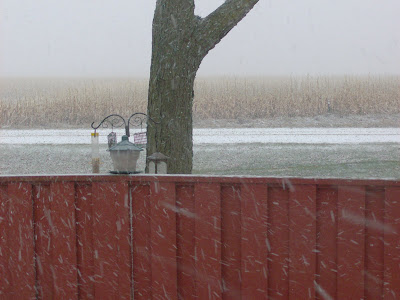 This is Noel laying on another new scratching post/cat thing John built this week and put in the Prairie Room in the sunny windows. Noel has a scrape on her left leg from falling (I think we've determined) somewhere outside. She was limping the first day, but seems to have mostly recovered. 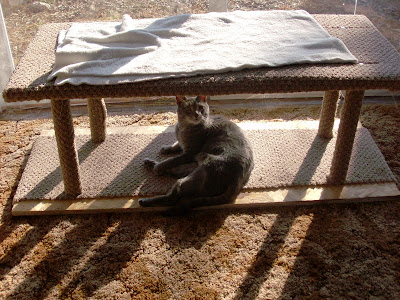 I think I can show this picture of Ann and her cousin, Maria, on the train ride in Boone in July (in Iowa) here. If not, you can click on the Flickr site and look for her in some of the sets.

I'm guessing Ann is on her day-hunting job, associated with books and learning and curriculum and computers. I couldn't find her picture in a blog she set up for librarians in MN, 23 things on a stick, but I think it used to be there somewhere. Oh well....

I've added a bunch of pictures to the Flickr site, and Samantha has added some recently, too. I haven't finished putting information on all the pictures, or putting them all in sets yet, but they are there if anyone would like to view a slideshow.

Click on this link highlighted or "CampStanhope's Flickr Site" in the right column under the kitty and it should take you there. Thanks.
Posted by Camp Stanhope Happenings at 9:06 PM No comments:

This is my mom and dad (middle and right) looking at my sister, Shirl, holding her grandson, Izaac during breakfast at Granite City for my mom's birthday (which one of her grandchildren thinks has lasted a LONG time for a birthDAY).

After brunch (spectacular cinnamon rolls!) we went back to mom's and got some pictures taken for Christmas, etc, since everybody was in attendance.
This is our 'family'. John and I are on the loveseat, and behind us are Alex and his girlfriend, Allison, and Samantha and her boyfriend, Marty. 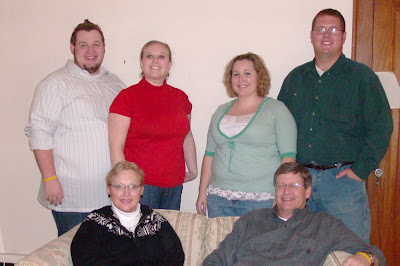 Posted by Camp Stanhope Happenings at 8:48 PM No comments:

This 31-second video is dedicated to a cat blogger, Skeezix, in California. It's probably far enough away so he isn't too frightened by this siting, but you just never know how desperate one of these things could be, and last time I saw him, he WAS heading WEST!!

Tuesday, but we already voted!! 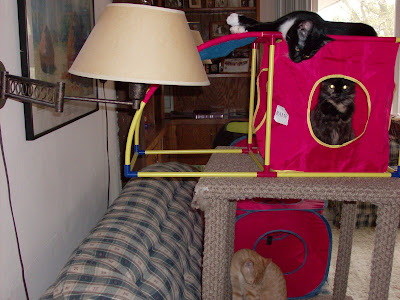 On Sunday morning John decided he'd vacuum a little more thoroughly, so he put the cat squares and the scratching table/thing up on the couch so he could accomplish this. Before he got the vacuum out, the orphans were enjoying being off the floor!

That's Pat (Hughes) on top, Lucy looking out from the square, and Ron (Santo) on the couch. 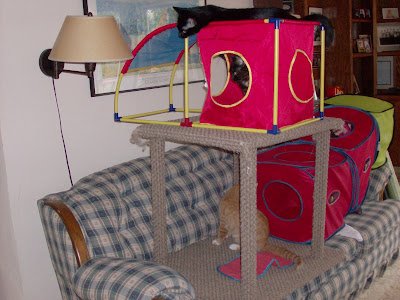 Izaac modeled his costume on Sunday at Great Grandma's for those of us who didn't watch him on Halloween. He really liked the idea of going to knock on doors and someone handing him candy! It was warm and pleasant weather, so that helped, too.
He didn't like the hat too well, but left it on long enough for us to get a couple of pictures. 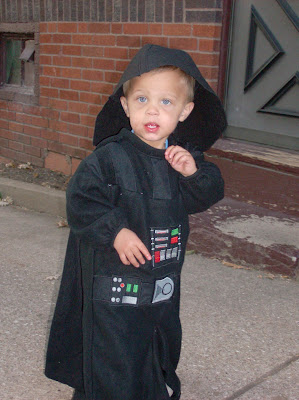 The first Sunday in November...

Izaac got two new teeth this week, so the good thing about it (since it seemed annoying and painful to him) is that he LOVES to brush his teeth! My dentist would be so impressed! (Just ignore the dish drainer-for my sake!) 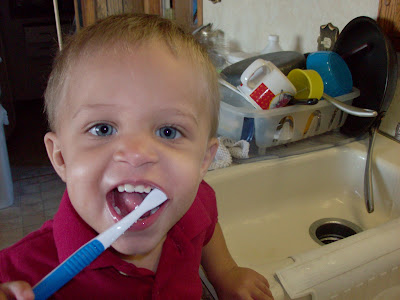 It's corn harvest time in the central plains, so I was on one road yesterday and could document several phases of this. Below is an old combine working to capacity! 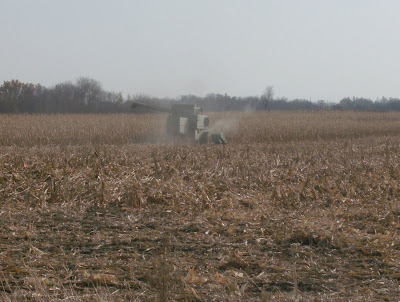 This is a 'corn wagon' for us non-farmer types. When the combine gets full of corn (or soybeans, but they're already long gone around here) it dumps the grain into this, so the corn can go to a storage bin. 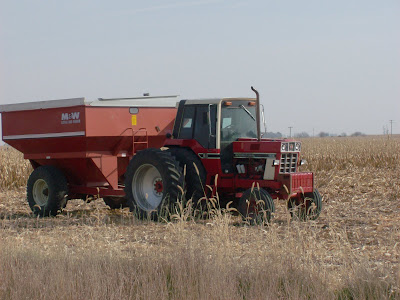 Below is a pile of turkey (or could be chicken) poop waiting to be spread onto a field for fertilizer. 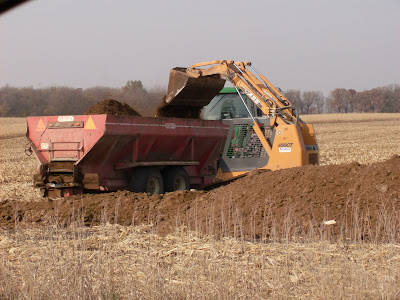 This is the last step for most farmers around here. Below the tractor is pulling a disk to combine poop/stocks and soil for winter. 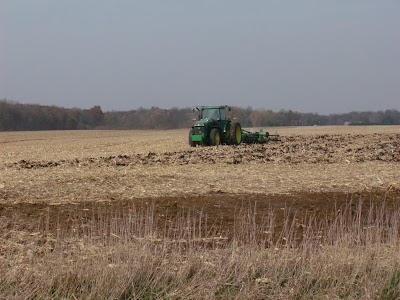 Posted by Camp Stanhope Happenings at 9:30 AM No comments: