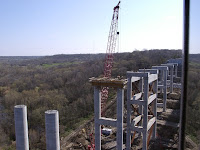 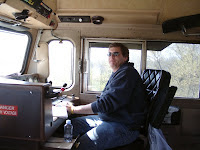 On the left, John, doing what he does....'driving' the train. On the right, a view from train (from the old bridge) overlooking the construction of the new high bridge over the Des Moines River near Boone, Iowa.

There is an article about the bridge, which will be 2550 ft. long and 195 ft. high here with other pictures.  The bridge is expected to be done in December, 2008.  The old bridge was built in 1911.
Posted by Camp Stanhope Happenings at 10:12 PM No comments: 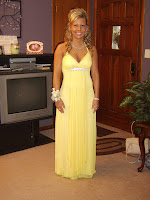 My niece and nephew, Michelle (Zimmerman) and Joe (Markey) attend the same high school and are both seniors now. (Joe's younger brother will be a sophomore next year at Hoover High School.)

Michelle and Joe did NOT go to the prom together, but I thought it was nice they got their picture taken together. Michelle had a great time, especially watching the hypnotist. I'm sure Joe had a good time, but I'm not sure I actually asked him.
Posted by Camp Stanhope Happenings at 5:44 PM No comments: 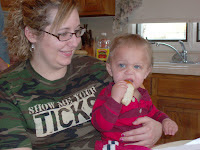 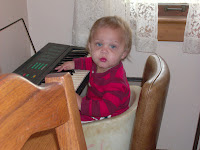 These pictures are from Sunday in Des Moines. Izaac LOVES to play G.Grandma's little keyboard. We all hope it's a sign that he got his grandma Shirley's piano-playing gift.

That's Samantha holding Izaac while he critiques the purchased bread (I didn't like it very well, either. We'll take homemade G.Grandma bread anyday over this!)

p.s. I think Samantha is wearing the t-shirt she got at the "what's a Brad Paisley" concert.
Posted by Camp Stanhope Happenings at 10:41 AM No comments:

We're all tired of the cold, okay? Enough is enough! 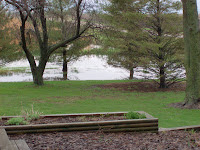 This is a picture looking east out of the kitchen door this morning. We had about an inch of rain since midnight. But since there was rain BEFORE midnight, and two nights ago we had about an inch, our yard is a bunch of puddles surrounded by green grass.

It was 60 degrees this morning, and now is 38 with winds blowing 30-45 mph, making the windchill 26! Spring weather in Iowa isn't usually this cold for this long. I'm ready for yard work and planting, and I know the farmers are itching to get into their fields, so let's have a day or two of NO RAIN. Thanks for listening!!
Posted by Camp Stanhope Happenings at 6:49 PM 1 comment: 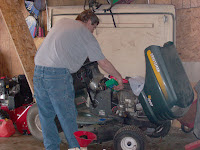 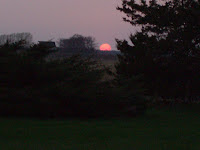 The picture on the right was taken earlier this week when I went out to the garage for something. I was trying to hurry to take this because the sun was disappearing fast, and it doesn't really look as spectacular as it did in 'real life'.

The picture on the left is John filling the mower with gas and getting it ready for the coming season. I spent 2 1/2 hours picking up sticks in the yard yesterday and didn't get done!

It's still thunder-booming around here, but we didn't get tornadoes like they did just about 10 miles northeast of here near Blairsburg (and more touchdowns farther northeast, in Clarion, Dows).
Posted by Camp Stanhope Happenings at 11:05 PM No comments:

This video was taken on Saturday after (aunt?) Samantha came home to do laundry and hang out with us. Samantha had the camera sideways and I can't figure out how to turn it and upload it--so you'll have to watch this 38 second movie sideways.

It was cute because he's started to 'vroom' almost every toy, whether it be a vehicle or not, including this rocking chair and the 'swiffer' I have to sweep the kitchen floor (there's several cute short videos of that, because he was really trying to sweep by moving all around the room).
Posted by Camp Stanhope Happenings at 10:45 PM No comments: 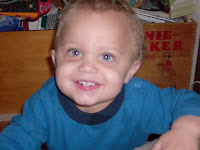 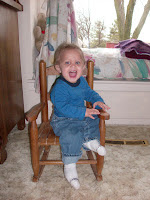 It's been a week since I updated the blog, but I had a good excuse. That cute great-nephew of mine came for a visit last Wednesday and I returned him to Des Moines yesterday afternoon.

Last night I started the 'return-the-house-to-normal' process by: 1)putting the toilet paper back on the roller (his mom warned me), 2) take the child-proof locks off the kitchen cupboard doors (adult-proof, too, since I couldn't get them open too far!), 3) put the cat food and water back on the floor, and 4) put away the toys and equipment (wipes, etc.), and let the cats have some of their toys.

It's a little sad the first few hours (days?) after he leaves. We had a good time and did a bunch of reading/cuddling and having fun chasing each other back and forth between rooms.
Posted by Camp Stanhope Happenings at 10:43 AM No comments:

Well, it's a little warmer today 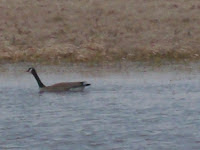 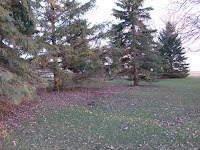 The picture on the left is in the field across the road (with 3 cows) Sunday morning and a Canada goose was in the puddle making a bunch of noise.

The picture on the right is from the middle of the west yard looking back towards the house (which you can't really see too well). The grass is finally getting green.
Posted by Camp Stanhope Happenings at 9:17 PM No comments:

It's Spring in Iowa! 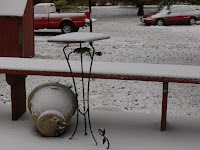 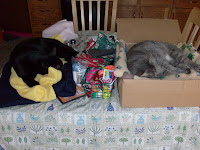 Bogie and Noel don't usually get this close to each other, but there was some fleece (which is used for their beds) fresh from the dryer on the table, and Bogie couldn't resist. He's on the left (but he's so dark it's hard to see him).

On the right is what we all woke up to this morning. Thursday afternoon we had winds over 50mph off and on all afternoon, and 8 tornadoes about 100 miles to the south/southwest in Iowa. Last night the wind was howling again, and then it snowed!
Posted by Camp Stanhope Happenings at 9:08 AM No comments: 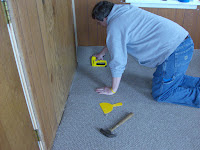 Well, the carpet is down on the new floorboards and the shelves are in their new slots on the back porch (but empty so far). It looks better (but dirt would have been a step up from that 12-color 60's shag that was there and in such terrible shape).

The other new fun thing in the house is the machine we bought this morning and I hooked up all by myself! It's the digital television converter box. We have 3 tv's, and no cable, so we got the coupons and purchased two converters.

It took longer to untangle the cords and antenna to the tv as it did to program the new remote and see a picture (less than 30 minutes total). We now have three public television channels, and the best extra channel it picks up is a weather channel!!! It's the channel I miss most (from cable) during an Iowa storm. okay, yes, amanda, i know it's mtv for old people, but I'm still excited!
Posted by Camp Stanhope Happenings at 7:06 PM 1 comment: 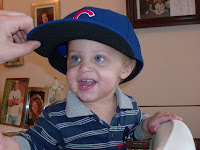 Uncle (?) Joe (Bob's oldest boy, 18, and soon to graduate from Hoover in Des Moines) wanted Izaac to try on his fancy new Cubs hat. Joe also got a new 'authentic' D. Lee Cubs jersey, which he was wearing, also, but was careful to stay away from Izaac while he was eating chocolate cake and strawberry whip!
Posted by Camp Stanhope Happenings at 10:20 AM No comments: 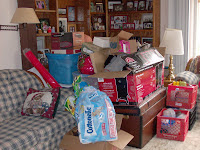 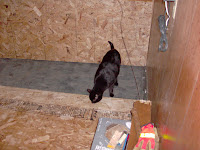 In the right picture is Bogie inspecting the new floorboards John has put down on the back porch. Our back porch is more like a partial basement for storage, and it's 8'x14'.
There are usually two shelving units that have Christmas decorations, various containers, and miscellaneous stacked on them, but today, some of that is stacked in the LIVING ROOM!!! (that's the picture on the left)
Posted by Camp Stanhope Happenings at 10:01 AM No comments:

This is in response to the request for an answer to this blog posting (on 3/2 on this site) "What's a Brad Paisley?". Here is the link to the video that I found so funny last summer (we don't have cable tv, so I rarely see any song videos).

Brad Paisley was supposed to be on Garrison Keillor's show on public radio today, but my sister-in-law called to tell me and then we chatted for 45 minutes of the show!! oh well. If he was on, I missed it.
Posted by Camp Stanhope Happenings at 7:47 PM No comments:

My mom sent me these and I scanned them, so if you need to see them larger, click on the picture, and to return, click on the left (back) arrow (in the upper left hand corner). His teeth front teeth really show nice in the left picture. The pictures are actually a little more 'colorful' in real.

Izaac's grandmother was playing the piano after church (at church) on Sunday, and Great-grandma was helping to hold the book and turn pages. Izaac was standing, leaning against the keyboard when all of a sudden (they are quick even at that age, aren't they) he let go and fell under the grand piano and hit near the bridge of nose on something hard. I'm sure it won't be his last bruise--he IS a boy!!
Posted by Camp Stanhope Happenings at 6:53 PM 1 comment:

This is a video of Izaac testing out those cute legs leaning on the kitchen patio door window while Uncle Johnny is cooking (I can't remember what we had, but it sounds like he's chopping something, and I can hear the clothes dryer going in the background, too.).

He gets around pretty quickly on all four's, but has started 'walking' while holding on to things, like the coffee table, couch, etc. I've seen him stand on his own for a minute or so at a time (sometimes he stands until he realizes he's not leaning on something, and then crumbles to the floor).
Posted by Camp Stanhope Happenings at 6:12 PM 3 comments: