More power needed, so they rewired it!

We're at the 'end of the line' for our electric service, and for years our lights have blinked when the old air conditioner kicked on. We didn't think that much of it at the time. 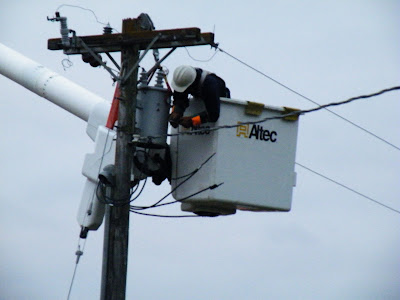 Since we've had the new heat/air exchanger to replace the furnace AND air conditioner, we've had some problems with it keeping us warm! (It hasn't even been that cold yet, so we were getting frustrated as was the heating guy!) 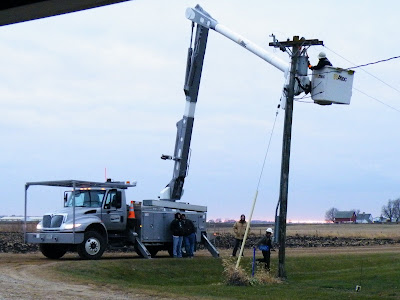 Yesterday afternoon, after the poor heat guy had been here (again) and we were waiting for the electrician, our power went completely out for no apparent reason.
So, we called the line guys, and they came and tried to replace the fuse, but it blew instantly, and then another blew, so they replaced the big transformer on the pole. We're guessing it's needed to be replaced for at least a couple of years, but nobody realized it. Thanks to the electrician(s) and the line guys (and John standing against the truck, too) for completing the work quickly in the cold! NOW WE HAVE HEAT!!! We think the lights are brighter in the house, too. weird......
Posted by Camp Stanhope Happenings at 10:29 AM