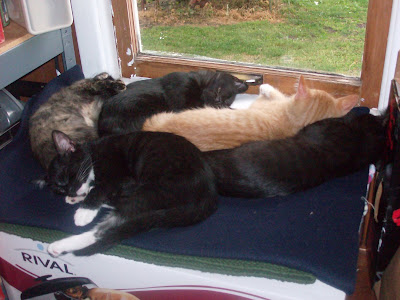 These are the 5 orphans snoozing together on the back porch. Usually only two or three sleep together (the combinations change every nap) because one of them won't be in the mood to nap, and end up just bugging their other siblings.

From left, that's the runt (still without a name), Gracie, Pat Hughes, Georgey, and that's Ron Santo in front. We kept calling 'yani' Ronnie, so as the die-hard Cubs' fans we are, we named the two that came BACK from Des Moines Ron Santo, who is the ginger boy with tuxie white chest and paws) and Patrick Hughes (who is the black tuxie boy).

Cubs fans will recognize these two names as the radio announcers for the Cubs. Ron Santo is a former Cub player also. I have to listen to the radio for most of the games and they are very entertaining, and won't be getting 'traded' to a different team, so we thought it was appropriate.
Posted by Camp Stanhope Happenings at 6:20 PM