What a Sunday! We had power until 8:25am, then it was off until 10am. It was on 15 minutes and then off again until 1:15pm! The furnace has not recovered apparently from the on-off cycling and even after an hour of the power being on again it still won't produce heat (but the fan works constantly, even when I turn the thing clear off!). 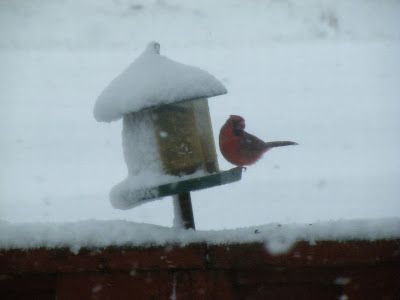 This cardinal seemed to be looking directly at me and cussing about the weather. Did he think I could do something about it? 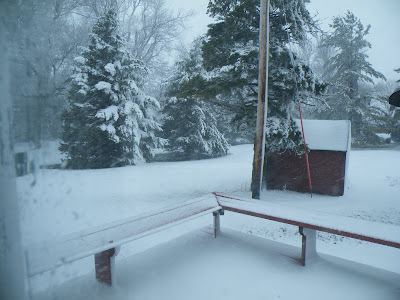 Gheez. What a day for the weather guy to get it right! It IS what he predicted. Snow and wind and yucky slush.
Posted by Camp Stanhope Happenings at 2:16 PM

YUCKY!!! We are supposed to get some snow but nothing like that, thank goodness! It is April, right?!?

Wow! Snow! I am so jealous! I am sure you would roll your eyes at me, you are probably so sick of winter - but i cant even tell you how much i want to wear a beanie!!

Your power outages sound like paraguay! thanks for living in solidarity!

That little fella is pretty cute! And so big!

I just talked to grandma, said she is headed over for bunny day! I hope you guys have a great time! I will be thinking of you and egg-hunting in spirit!
love,
r