Tuesday without a cell phone....

(This is Alex playing ping pong in Des Moines against his dad last week during his party. I think most posts are more interesting with a picture, even if it isn't brand new. That table was built by my dad when we were little, and if you take the ping-pong board off, there's a pool table underneath.) 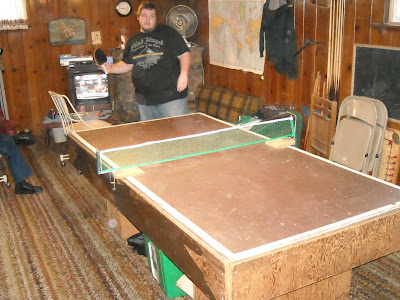 I've had a cell phone since April, 1996, and have NEVER gotten one wet before today. In gathering clothes for the washer, I threw my sweatshirt in to 'fill it' (and it needed the cat hair removed).

The washer had been running a couple of minutes when I discovered my phone wasn't where I thought I had placed it, and hit the stop button. But the washer is locked for two minutes before you can open the door, and it was two of the longest minutes EVER. Low and behold, there it was, at the bottom, filled with water.

I pulled off the back/battery and dried it quickly, and then put it in a container filled with rice to pull out the rest of the moisture. According to the Internet, this could take a couple of days. Oh well.
Posted by Camp Stanhope Happenings at 12:36 PM

What a drag! I hope it isn't ruined!

Hey, at least it wasn't the toilet!